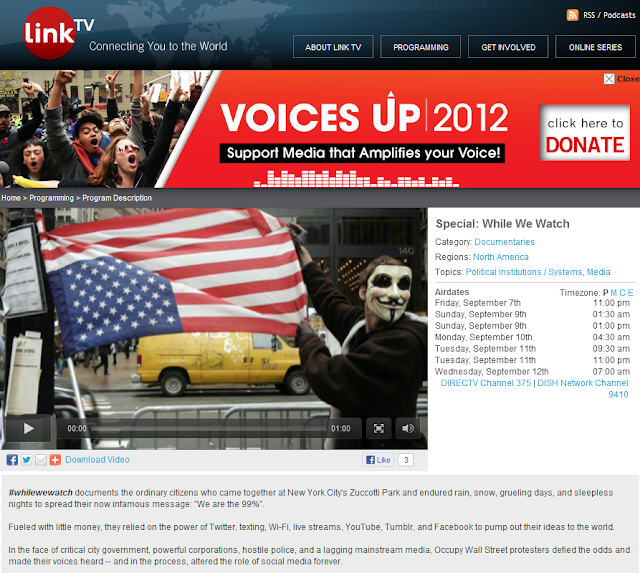 
A gripping portrait of the “Occupy Wall Street” media revolution, #whilewewatch is the first definitive film to emerge from Zuccotti Park – with full access and cooperation from masterminds who made #OccupyWallStreet a reality.


The #OccupyWallStreet media team had no fear of a critical city government, big corporations, hostile police, or a lagging mainstream media to tell their story.  Through rain, snow, grueling days, sleeping on concrete; they pump out exhilarating ideas to the world.  Fueled with little money, they rely on the power of Twitter, texting, Wi-Fi, posters, Tumblr, live streams, YouTube, Facebook, dramatic marches, drumbeats and chants. As the film unfolds, we witness a new dawn with the power of social media. 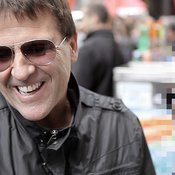 Director Kevin Breslin is honored to have been asked to present at one of the most prestigious global media events. June 20th 2012 Breslin will speak of his experiences filming #whilewewatch, the new media techniques and tools being utilized by the #OccupyWallSt media team at the 2012 Academic Summit at Stanford University near Silicon Valley, Ca.
As video and photo's become available we will be updating!

Navigating the Future of Communications


On behalf of Edelman, Media X @ Stanford University, and PR Week, we want to welcome you to the 2012 Academic Summit at Stanford, in Palo Alto, California. This year's theme - "When All Media Is Social: Navigating the Future of Communications" - is especially fitting, given our choice to host the summit in the heart of Silicon Valley.

As with our previous Summits, we'll convene academic leaders in the fields of public relations, journalism, business and marketing communications to learn from corporate executives, brand marketers and digital and media thought leaders. Above all, the Academic Summit is a forum for discussion. Participants will gain a wealth of knowledge that can be immediately incorporated into course curricula, and a greater understanding of the skills students need in order to pursue a successful communications career today.

The 2012 Summit - our first on the west coast - promises to be an extraordinary event, with robust content and plenty of special guests and opportunities. You'll hear from the world's leading technology and social media companies, who are fundamentally shaping how information is created, consumed and shared, and transforming entire industries along the way.

We'll share detailed updates about speakers and content in the weeks ahead, and you can also follow our updates on Twitter via #2012AcademicSummit. The 2012 Academic Summit will begin on Wednesday, June 20th at 1pm, and conclude on Friday June 22nd at 1pm. We'll be staying at the Stanford Park Hotel, about a mile from campus.
More - http://www.newmediaacademicsummit.com/Summit2012/home.html
Posted by StardustBlue Media at 6/20/2012 03:22:00 PM 2 comments:

Go to www.SNAGFilms.com/whilewewatch OR
Panel from The Paley Center for Media powered by Ustream! atUStream.tv/whilewewatch use Embed Links Below!!


#whilewewatch documentary is playing in it's entirety tonight at 8pm ET and again 8PM PT EVERYWHERE!


The embed code below is to place SnagFilms new platform on any web page ! 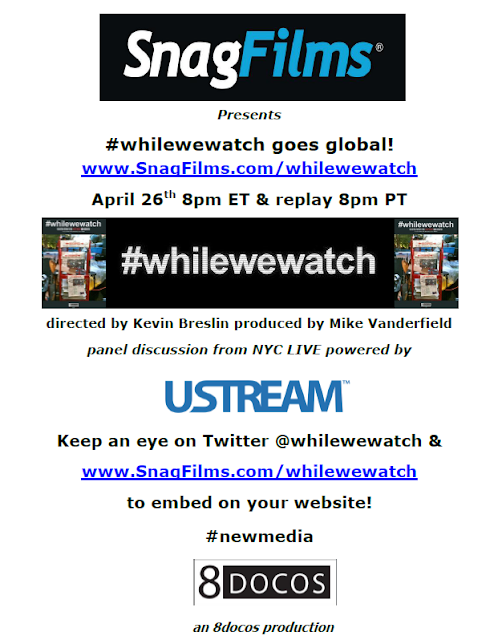 #whilewewatch in The Hamptons A Special screening at Guild Hall

A Special screening at Guild Hall

Talkback to follow with director Kevin Breslin and special guests!

#whilewewatch is a gripping look at the media revolution that emerged from Zuccoti Park in New York City to the world. It is the story of how many people came together in the sun and rain, day and night, broke and loaded with energy and hope to get their story out to the world. #OWS has galvanized the world. #whilewewatch is the real inside story of great people who have no fear. They don’t back down from the police, big business or a city government that tried to dismiss them. When regular media paid no attention to this movement they decided to tell the world their story.

#whilewewatch is the real experience of what democracy looks like. We hear it from their voices, pain, energy and honesty.